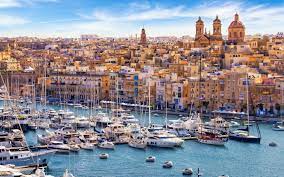 Malta’s capital, Valletta, was established as a result of the well-known Ottoman Turks’ loss during the Great Siege of 1565. The village, which has a population of about 6000 and is situated on a peninsula in the country’s east, has been designated a UNESCO World Heritage Site. It includes beautiful specimens of 16th-century baroque architecture and is located atop Mount Sceberras. St. John’s Cathedral, together with other inns and bastions constructed by the Knights of St. John, stand out among these. The Upper and Lower Barrakka Gardens in Valletta, Malta’s main harbour city, provide breathtaking views of the Grand Harbour. If you have the chance, attend the three-day Maltese Carnival. 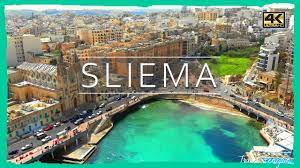 Sliema, which is 5 kilometres from Valletta, is where you can find some of the best dining and shopping in Malta. Although it used to be the country’s aristocracy’s playground, it is now the primary resort location. Both Maltese and foreigners may be found in great numbers here. The Grand Harbour offers a variety of boat tour choices, while Sliema is the starting point for island-wide hop-on/hop-off sightseeing buses. Check out the Independence Garden and the De Redin tower (17th century) while you’re in town. As you might anticipate from a resort town, there are plenty of activities to choose from at night. 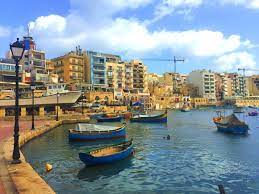 St. Julians is the destination for people seeking a little punch in the nightlife scene. This resort town, which is renowned for its capacity to entertain, is humming with late-night excitement. Portomaso, Spinola Bay, St. George’s Bay, and Paceville—where much of the action takes place—are all parts of St. Julians. Large flat rocks that flank the shore form the ideal sunbathing area for beachgoers, and the coastal promenade is a terrific spot to take a lengthy stroll. The Love Monument, Spinola Palace, and Portomaso Tower, Malta’s highest structure, are all located here (17th century). Come any time for incredible dance, exquisite cuisine, and wine, whether it’s in August for the typical summer festival. 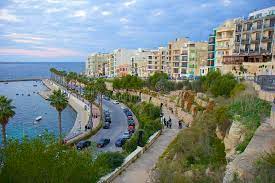 Qawra is located on a peninsula between Salina Bay and St. Paul’s Bay (Our-ra). The town boasts three seafronts as a result of the peninsula, and with such easy access, it is swiftly growing in popularity among those interested in water sports. Qawra is a fantastic choice if you want to enjoy fantastic nightlife but retreat to a more sedate and laid-back home base because it is also near to St. Julians. The 3k stroll down the seafront will take you all the way to St. Paul’s and offer breathtaking vistas. Don’t forget to visit the Malta Classic Car Museum and the parish church, which is devoted to St. Francis of Assisi. 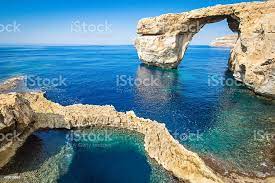 The little island of Gozo is located not far from the shore of Malta. The majority of visitors stop through for the day to take in attractions including the Azure Window, Citadel, Inland Sea, and the Temples of Ggantija. The majority of residents in Gozo enjoy the villages of Xlendi and Marsalforn, which are mostly a farming and fishing community. An day spent wandering the island will offer you a good impression of a more classic Malta because there hasn’t been much construction here. Most people take ferries, but if you want a little thrill, take a seaplane. 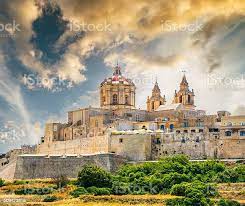 For a taste of mediaeval Malta, travel inland to the “Silent City” of Mdina. The village, located in the middle of the nation on a sizable hill, has few residents and is off-limits to automobiles. You will instantly recognise the beauty of Mdina when you add this to the breathtaking vistas of the entire island. It’s a great location to unwind while exploring the little streets. Though it is small, there is lots to do. Visit the Natural History Museum, St. Paul’s Cathedral, the Magisterial Palace, and the Palazzo Falzon in addition to the Carmelite Church and Priory. 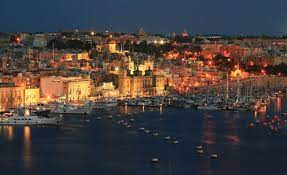 Birgu, one of Malta’s ancient cities, is located on the southern side of the Grand Harbour. It has long had military significance because of its position. Even during the Siege of Malta, the town was crucial. At different times, the city was ruled by the Greeks, Romans, Byzantines, Phoenicians, Normans, Arabs, and Aragonese, who also had an impact on its history and culture. The city’s main entrance is the famous Couvre Porte, and defensive walls encircle the entire area. Everywhere you look inside, there are monuments and remnants of antiquity. Visit the Malta Maritime Museum, The Parish Church, Notre Dame Gate, and the Inquisitor’s Palace (now a museum) before departing. 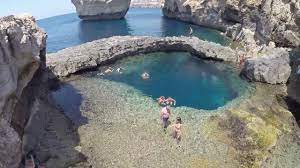 On Malta’s west coast, Dwejra is one of the most amazing spots because to years of labour by the sea. The present-day Inland Sea and Dwerja Bay are the result of two subsurface caves that collapsed and left behind circular depressions. Fans of Game of Thrones will immediately recognise this location from the first season of the programme. A 100-meter tunnel leads to a lagoon called the Inland Sea, which is surrounded by high cliffs on all sides. The greatest catches are caught by fishermen from this location, while tourists are shuttled back and forth via the tunnel on the side. The most well-liked diving and snorkelling locations in Malta are Dwerja and the surrounding region. 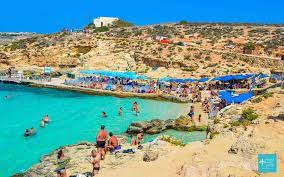 Surfers, divers, and visitors seeking for a day trip away from it all love the little island of Comino, which is famous for possessing the Blue Lagoon. Almost no one is on the island, and no cars are there. Comino radiates elegance and friendliness with its immaculate white sand beaches and clear, blue sea. You may swim across to the islet of Cominotto and have a long nap in the sun there. When you’re done, rent an umbrella and a deck chair. Consider travelling in the winter months to make the most of your trip as the summer months may be rather congested. 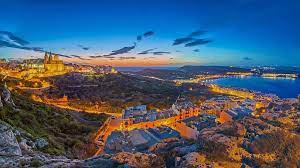 This beach, which is the biggest in Malta, gets its name from the Arabic term for salt. Mellieha, a charming and well-liked location among Maltese people, is another well-known tourist destination. The welcoming atmosphere in the area is enhanced by the wonderful hotels and restaurants along the shore. You may take part in the “Il-Viorja” Village Feast in September, which has religious processions honouring Our Lady of Victories, concerts, folk music, fireworks, and more delicious cuisine. Visit Ghadira Natural Reserve, Ghadira Bay, Armier Bay, St. Agatha’s Tower, and Popeye’s Village, the locations where the 1980 movie Popeye was shot, while you’re there. 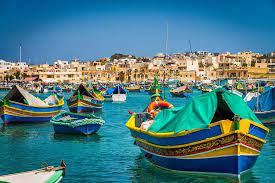 Marsaxlokk, a fishing community in southern Malta, is well-known for its Sunday fish market and its numerous brightly painted boats with Luzzus decorations that resemble eyes. The Phoenicians and subsequently the Turkish navy utilised this location during The Great Siege. It has a history dating back to the ninth century. Archaeologists have also discovered Bronze Age artefacts on the Tas-Silg hill. Although Marsaxlokk’s primary power plant is located here, industry plays a significant role in daily life. It is worth visiting because of the delectable seafood and clear ocean. Cliff diving is a great experience at St. Peter’s Pool, which has a nice beach that leads there. 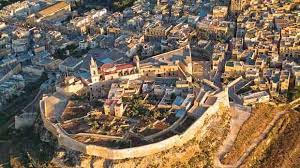 The ancient city and the citadel, which are both located in Victoria (or Rabat), the country’s capital, are both located on a hill. Independence Square (18th century) was once the government centre and is now home to a lively open-air market with cafes serving pastizzi and tonnes of fun souvenirs. The Citadel (located in Independence Square) serves as the heart of the island and is sometimes referred to as the “Crown of Gozo” because of its location. You’ll like exploring the neighbourhood around the Grand Basilica, which is situated in possibly the oldest portion of the city. Make sure to sample the regional cuisine as you go. And before you go, make sure to see the Gozo Cathedral, the Old Prison, Villa Rundle, and the Folklore Museum. 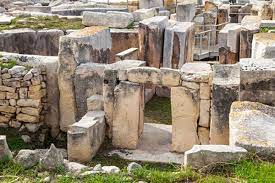 The standing stones known as Hagar Qim and Mnajdra are the most impressive and well-preserved of all the ancient monuments in Malta. The setting is breathtaking because it sits at the very top of a sea cliff. The earliest temple, Hagar Qim, has been reconstructed so that you may get a greater idea of how it once appeared. The 20-ton megalith is located next to it. The renowned Venus de Malta, or “fat lady,” sculpture was discovered here. She is currently on exhibit in Valletta’s National Museum. Three ornate temples make up the Mnajdra complex, which dates back to 3000 BC. 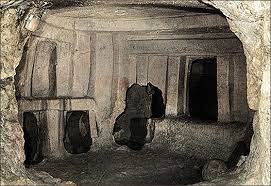 The Hypogeum is a strange underground necropolis that was found in 1902. Over 500 square metres of rock have been carved out to create the corridors and chambers. Approximately 7000 persons have been interred here since it was erected, perhaps between 3000 and 3600 BC. This amazing building was hand-carved. The site was closed for ten years as the administration worked to repair and safeguard it using UNESCO monies to prevent carbon dioxide harm from visitors. Now that the microclimate has been regulated, the structure is secure. Booking in advance is necessary due to the 10 visitor maximum each excursion. 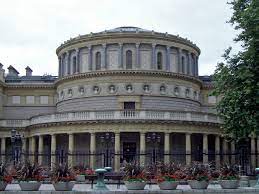 The museum, which is housed in Valletta’s Auberge de Provence, has an incredible collection of artefacts dating all the way back to the Neolithic and Phoenician periods. The majority of the places you’ll visit as you explore the nation will have a superb introduction and context thanks to the extensive ancient history of Malta. Bronze daggers from the Tarxien Temples, the Venus of Malta, the Sleeping Lady from the Hal Saflieni Hypogeum, and a Phoenician necklace with the images of Horus and Anubis are all on display. Along with teaching you about the everyday activities and artistic creations of the early islanders, the museum is also one of the most ornate Baroque structures in the city. 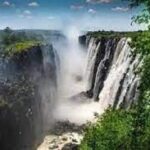 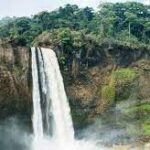 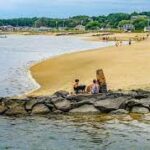